It is a period of uncertainty. Rebel drones, striking from a hidden van, have won their first victory against the Disney Empire.

During filming, Rebel spies managed to steal spy shots of the Empire’s new blockbuster, STAR WARS EPISODE VIII,  a movie with enough hype to rake in an entire planet’s GDP.

Pursued by Disney’s security, the drone races back to Stormtrooper Larry, custodian of the spy shots that will thrill Star Wars geeks and ignite excitement across the galaxy…

Opening shot… it’s the Millennium Falcon! The grimy ship looks clean, and appears to be resting in the same planet it landed at during the ending of The Force Awakens. 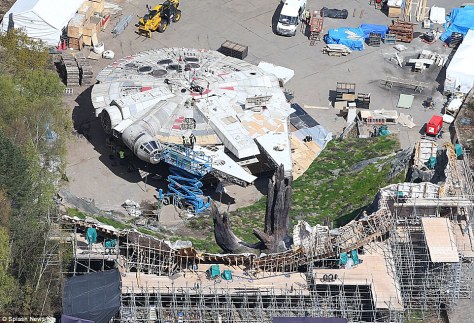 The planet is the same (Ahch-to, Luke’s planet of exile and rumored home of the first Jedi temple), but the filming location is actually different. The crew had to recreate the island of Skellig Michael from Ireland in the backlot of London’s Pinewood studios. This is due to concerns of the crew’s impact on the UNESCO-protected island, as well as recent rockfalls that made it a hazard to film onsite.

In a zoomed out view, we can see the Jedi steps painstakingly recreated by the crew. The real island featured 618 steps carved out of the stone, which Rey climbed to meet Luke.

One new feature is a gnarly, menacing tree that looks out of place in the verdant green of Ahch-To. Could this be Episode 8’s version of the dark side cave on Dagobah?

“Oh, that tree? That’s where you’ll mock-battle Kylo Ren while I poke rocks around.”

Here’s a closer look at the Tree of the Dark Side:

“Oh and don’t mind the smell. It’s also where I hang my dirty Jedi laundry.”

Or maybe it’s not a gnarled old tree. Luke might have burnt it when he first arrived on the island, which explains this tantalizing scene from The Force Awakens:

A funeral pyre tree for his dead students, then? Either way, that is one creepy-ass tree.

But that’s not all. Higher up the hillside, we see a completely different set… what looks to be the main entrance to a reinforced building, fronting a huge courtyard!

Our guess, is it could be either:

We also see a bold red stripe, which was characteristic of the old Galactic Republic and the Rebel Alliance. 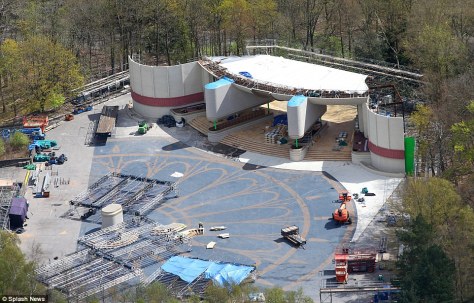 Those walls sure look thick. In fact, they bring to mind the German artillery emplacements in Normandy during WWII:

But then again, It could just be a majestic entrance, considering those tiny steps and the scale of the walls. Could it be the new Senate building? That courtyard looks royal enough and hearkens back to Naboo.

Finally, we leave you with this shot of an unfinished set.

The upper edges seem to be finished and appear to show an ancient and rundown setting. Could this be the sinister underbelly of the city where Finn and Kelly Marie Tran will have their romantic adventure?

Did these stolen set plans whet your appetite? If you’re hungry for more, then read what COULD be the leaked plot of Star Wars Episode 8!

Disclaimer: No Bothans died to bring you this information.