If there’s anything Stormtrooper Larry loves about Star Wars, it’s the ships. And we’re not talking the tiny snubfighters and their little dogfights. We’re talking about the big dogs of space battles: the capital ships.

Ever since the Star Destroyer crawled on top of the screen in A New Hope, its imposing wedge shape became part of popular culture. And Bandai seeks to capture that massive presence in a compact, budget-friendly model kit with their new Vehicle Line series, which only costs around $8-10.

Famous for their Gundam model kits, Japanese kit maker Bandai expanded into the Star Wars universe last year with their wave of OT and TFA vehicles.

The models ranged from 1/48 to 1/72 scale, and were “snap-kits”, requiring no glue or cement. They were highly praised for their fine detailing and large size, rivaling much pricier brands like Fine Molds.

With their matchbox-sized Vehicle Line, Bandai seeks to replicate that success in a tinier scale that’s accessible for children, budget- and skill-wise. In fact, we got this kit for US$8.50!

Enough with the chitchat. Let’s get down to business. 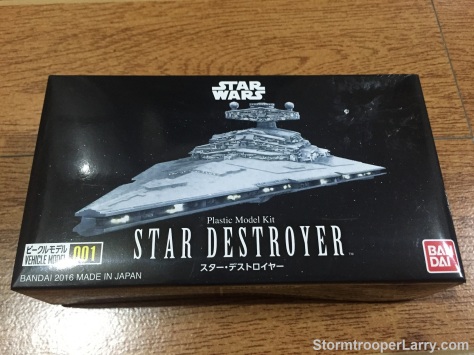 The kit comes in a small box, roughly 6 x 3 inches, small enough to be grasped with one palm.

Most of the box labels is in Japanese with English translations. To date there are two models in the series, the Star Destroyer (001) and the classic T-65 X-wing (002).

Rather than a traditional leaflet, the instructions are printed inside the box lids to drive down cost. Unlike the larger models, instructions for the Vehicle Series come with English translations. The simple build process and straightforward photos make such translations unnecessary.

Inside, the kit comes with 5 sprues trees:

A1 holds the uppermost parts for the bridge, as well as the rear section: 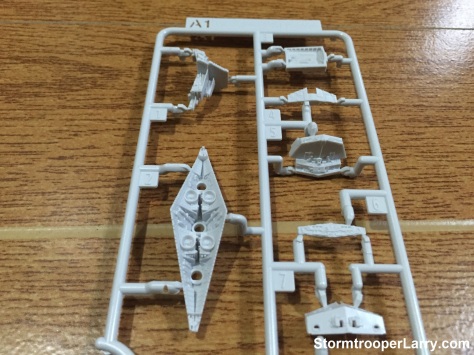 A2 is the dorsal half of the hull, the communications array, and the two sides of the conning tower: 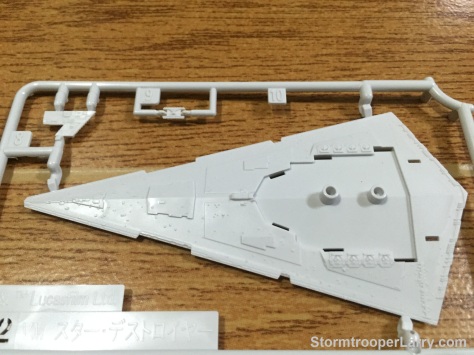 A3 completes the top details, containing the the upper decks, hull sides and engine nozzles:

A4 is the bottom half of the hull, along with the shield generators:

Finally, A5 holds the stand. This is the only part of the kit that has slight discoloration, noticeable because its black:

True to Bandai form, all pieces were crisp and snapped off without a hitch. Often all you have to do is a snip a single sprue, and you can snap off the part from the remaining sprues.

The only pieces we don’t recommend snapping by hand are the hull sides, since these long parts might break in half.

The ship is divided into 4 parts: the main hull, upper deck, conning tower, and finally the bridge superstructure. As a snapkit model, all the pieces locked into place without modeling cement.

Total assembly time was a leisurely 10-15 minutes, including the time spent taking pictures for you freeloaders.

And here’s the finished product: the fearsome mile-long Imperator-class Star Destroyer., the backbone of the Imperial Navy.

Details are crisp enough to pick out the individual ridges, portholes and armor plates that dot the surface of the ship.

The model rests on a ball joint so you can pose the destroyer any way you please: 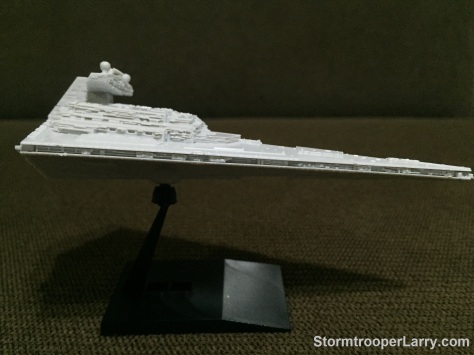 A closer look at the conning tower. You can make out the bridge windows as well as myriad details on the raised decks above the hull!

Same story for the rear, with exceptional detailing on the hull, engine nozzles, and even the area where they eject space trash:

The most amazing thing about the Bandai Star Destroyer is the size. All of these excellent details are packed in a ship only slightly larger than a Titanium: 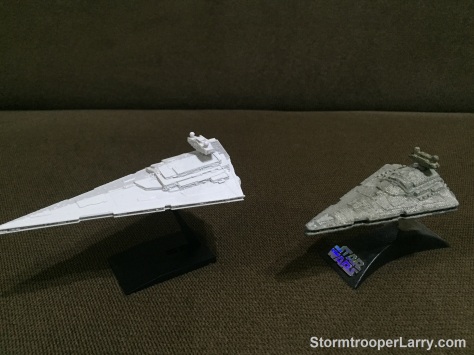 In fact, this tiny terror measures just shy of 4 inches long, only one inch bigger than its Titanium cousin.

Since stormtroopers have poor aim, we decided to leave the model unpainted lest we turn it into a psychedelic art ship crewed by hippies.

However, Stormtrooper Larry knows one poor man’s weathering trick: we simply took a pencil and rubbed the lead all over the surface.

While not as good as a “model wash”, it helped bring out the surface details while giving the ship a metallic look.

And that’s it for our review! Now go buy your own model while we make humming noises for our ship.

The Imperial Star Destroyer Fornicator has planets to subdue.